Thought of the day:
So amazing to get back into the outdoors! In a brand new, fresh environment and the anticipation was buzzing in both of us.

Thankyou:
– Jasper and Ellen from Kili Climbers and Safaris for putting us up for 3 incredible nights at the tranquil Amin cottages located by a waterfall in Marangu

Notes:
After a two day rest and recovery period at the beautiful Amin cottages in Marangu I once again found myself at Machame Gate. This time instead of wearing split sided running shorts and a sweet viser, I was dressed in thermals, a fleece and tramping pants (not zip offs though). We decided to carry our own packs and tent to help make the challenge more of our own. Even with us carrying our gear we still had to have 2 guides, a chef, and 5 porters between us. At first I couldn’t get my head around the idea that people were carrying up tables, chairs, a dining tent, gas bottles and an array of food, condiments and beverages, but we had no other option as this was the most minimalist option available. For someone who is use to being completely self sufficient in the outdoors this was difficult for me at first. Then as we walked I could see how many jobs were being created and making Kili accessible to many people who would be unable to do it any other way.
Our first day was through lush rainforest and misty cloud. Everything was green and actually reminded me of the Hunua ranges back home. It was a steady incline for 5 hours but was very enjoyable. We were greeted at campsite with popcorn and tea and chilled out before dinner.

Thought of the day:
Slow and steady wins the race. A Tortoise day

Note:
Our guide Athmani labeled today as the steep day and said it would be the most important to take slowly for climatization. Due to the traffic jams at each hazardous step it actually created a slow pace with many rests and was very manageable. We notice the vegetation change to sub alpine scrub and a significant temperature drop. We met a bunch of people on the walk and it was interesting to hear everyone’s different reasons for climbing.

Location: Shira Camp to Lava Tower and down to Barranco camp

Note:
Day 3 saw us steadily climb up to the Lava tower where we would have lunch. This was a straight forward day with clouds coming and going but we managed to get a few really nice views of the mountain. Our lunch spot was cold and windy but gave a great chance to put on some of our summit layers. We then descended to the busy Barranco camp for the night. This camp was packed as its where the Lamosho and Umbwe route join the Machame. It’s a great place to socialise if your killing time. It also has stunning views of the lights of Moshi town at night.

Thought of the day:
Up and down, up and down!

Note:
This was by far the toughest and longest day yet. This day separates the people doing it in 6 days with the ones taking 7. The people on 7 days stop at Karanga camp 3900m. The day started with the breakfast wall, a near vertical 300m wall that keeps going up. The reward is worth it though with the best views we had seen yet. After some snapshots it was down hill, then up, then down again until we reached the giant gully we had to cross to get to Karanga for lunch. After a quick bite we started the slow 700m climb up to base camp. We were pretty tired and worn out but I was pretty stoked to be finally gaining some descent altitude.

Day 5: summit and descent to mweka

Thought of the day:
Exhaustion!

Note:
This was the best but hardest day. After an evening of constant spewing and headaches we started our ascent at 12:20am. It was a sick, dark, cold, slow, and awesome slog to the top of Stellar point. Many times I wanted to stop and just sit down but then you get cold and loose your focus so you must keep moving. Ally started to struggle but she had 3 people who would not accept no for an answer, so she dug deep and like a champ got on with it! We reached the top of the ridge to witness the sun was just coming up and it looked like someone had lit a massive fire under the clouds. After our celebration poses at the sign it was time to start the 2 hours descent back to base camp with the fragment of energy we had left. The walk down is a bit blurry for me but I clearly remember that some egghead kept shifting the camp further and further away.
We finally got down and had some pineapple juice and a nap, then it was pack up and begin the 3 hour descent to Mweka camp which was actually not as bad as I thought it would be. Recharged with fluid and food the walk down had breathtaking views and watching the vegetation reform in various stages was rather interesting.

Thought of the day:
As exited I was to complete this sea to summit I was also sad that it was over, even though this was the hardest thing I have done!

Note:
3 hour walk back to the gate on the worlds slipperiest path. Porters whistling and flying past you while your left knee cries out to be replaced. Great walk to reflect on your experience 🙂 Besides that the rainforest is beautiful and teaming with birds and monkeys. Good to be back and have a nice shower and no more cucumber soup!

Quote:
“It’s not the mountain we conquer, but ourselves”
Ed Hillary

Misty rainforest on the way to camp 1 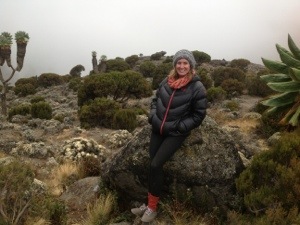 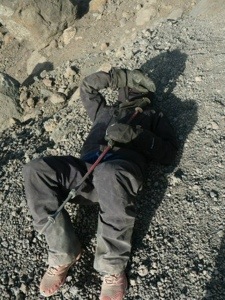 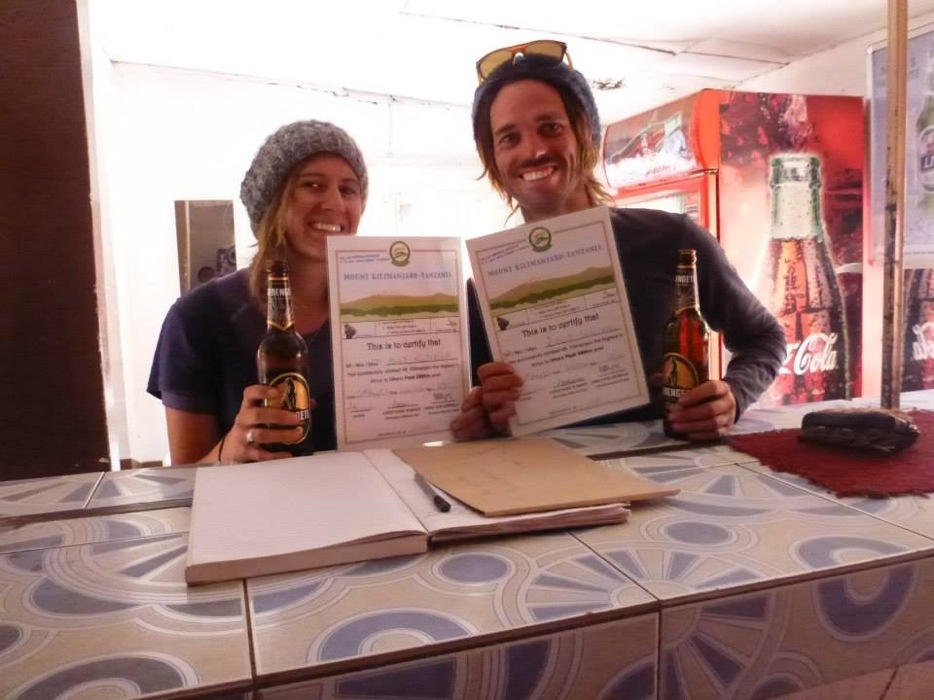 Celebrate good times come on! Pretty sweet mo too if I must say