With only 4 weeks until Mt Elbrus I am in full training mode, which means I am starting to eat sleep and breathe this upcoming challenge. I believe there is no better way to train for the upcoming a sea to summit, than to complete a sea to summit here in our back yard. Mt Taranaki is a very fitting way to do this as the previous winter attempt in 2012 (which sparked sea2summit7) was not completed due to icy conditions and underestimating the enormity of completing the ascent in one day. But with the original crew back together with wiser, more experienced heads and stronger bodies nothing was going to stop us finally achieving this feat.

Myself- mixture of Bear Grylls and Steve Buschemi

We all finished work and preschool and headed down to Oakura on the west coast of Taranaki. We arrive just after midnight with no sleep and start getting ready for an unaided alpine style ascent. The last time I did this was carrying 25kg of climbing gear through a Chilean desert, but luckily a speedy one day climb requires much less gear.

Having the right gear is essential for raising your chance of hitting the summit! Thanks Bivouac Outdoors 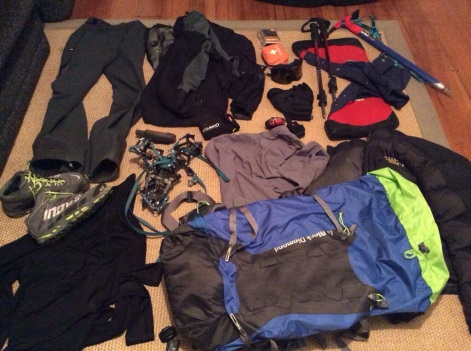 Unfortunately Ryan was still injured from tough mudder and had to look after the little ones so we decided that Jonny and I would meet them all at the foot of the mountain in 10 hours time. We made really good time on the 14km road section then it was into the bush for a bash up a ridge to find the track. Last time it was foggy and we lost time navigating to stay on the ridge but luckily this time it was straight forward and bashed our way up a bait trail to reach the Pouakai track before sunrise. After a quick refuel we dropped into the icy valley as the sun started rising to unveil  some of the most beautiful scenery I have ever seen.

Western view from the gully plateau

Jonny and I had finished our traverse around the NW side of the mountain to arrive at the foot of the summit track at 10:30 for a much needed break. At 10:50 we saw a tired sweaty figure carrying two children up the puffer track and we were delighted to identify this crazy pile as Ryan, Indie and Christian. We then started heading up the summit track and shared the load (the kids) on our shoulders and managed to make it to the 2000 meter mark before it was to icy for the Pellet Whanau to continue. We guesstimated that Indie was legally the highest three year old in the country at that time.   After completing the porter duties we said goodbye to our support crew and started the hard trek up the scree where it is two steps forward, one step back. 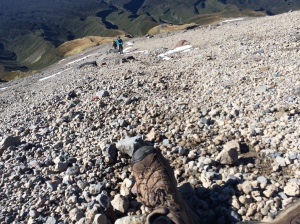 We had been going for 12 hours now and I knew with the icy conditions in the summit crater we needed to make good time along the summit ridge so we had enough light to get down safely. Most people we on their way down now and the familiar story was that it was too icy in the crater to summit without crampon skills and patience. We passed an Eastern European couple travelling at a snails pace which meant we had the crater and the summit all to ourselves. Starting to fade now we smashed an up & go, jerkey, and powerade and prepared for the final push to the crater. We reached the ice shelf that sent everyone without crampons packing and traversed the 1 meter wide gateway always keeping 3 points of contact and double checking the bite of the axe and points. We emerged into a white  ceramic crater bowl hidded from the sun and gazed up the ridge at the summit which was only three contours away (60m). Pumped on a mix of adrenaline and summit fever we wasted no time heading up the guts step by step toward our goal. Finally after 14 and a half hours of walking, scrambling, and climbing over 3000m ascent and 38km,we finally reached the summit of Mt Taranaki. We cheered, embraced, fulfilled media obligations then took five minutes to just sit and enjoy the million dollar view that can only be earned.

Selfie from the top

It was home time now and this is usually when most accidents happen and we had just enough time up our sleeves to take it easy and cruise home. Shortly into our descent we ran into the European couple who seemed to still be moving as slowly as students walk to maths class and we asked if they were ok? They assured us the were fine and we continued down. An hour passed and they had hardly moved so we decided to contact search and rescue and inform them of the situation. This is exactly what we felt like doing after 15 hours of adventuring, but we stayed with it until finally we saw them reach the staircase and could make our way to the visitor center with peace of mind.

Few things in life can match the feeling of returning to camp or your car after a successful climb, especially if it has previously eluded you. The smiles Jonny and I were wearing did not match the pain we had just caused to our bodies. Exhaustion is always countered by elation.

Thought of the day: Not summiting is the best excuse to go on another mission

Remember to take the path less travelled, Get amoungst it! 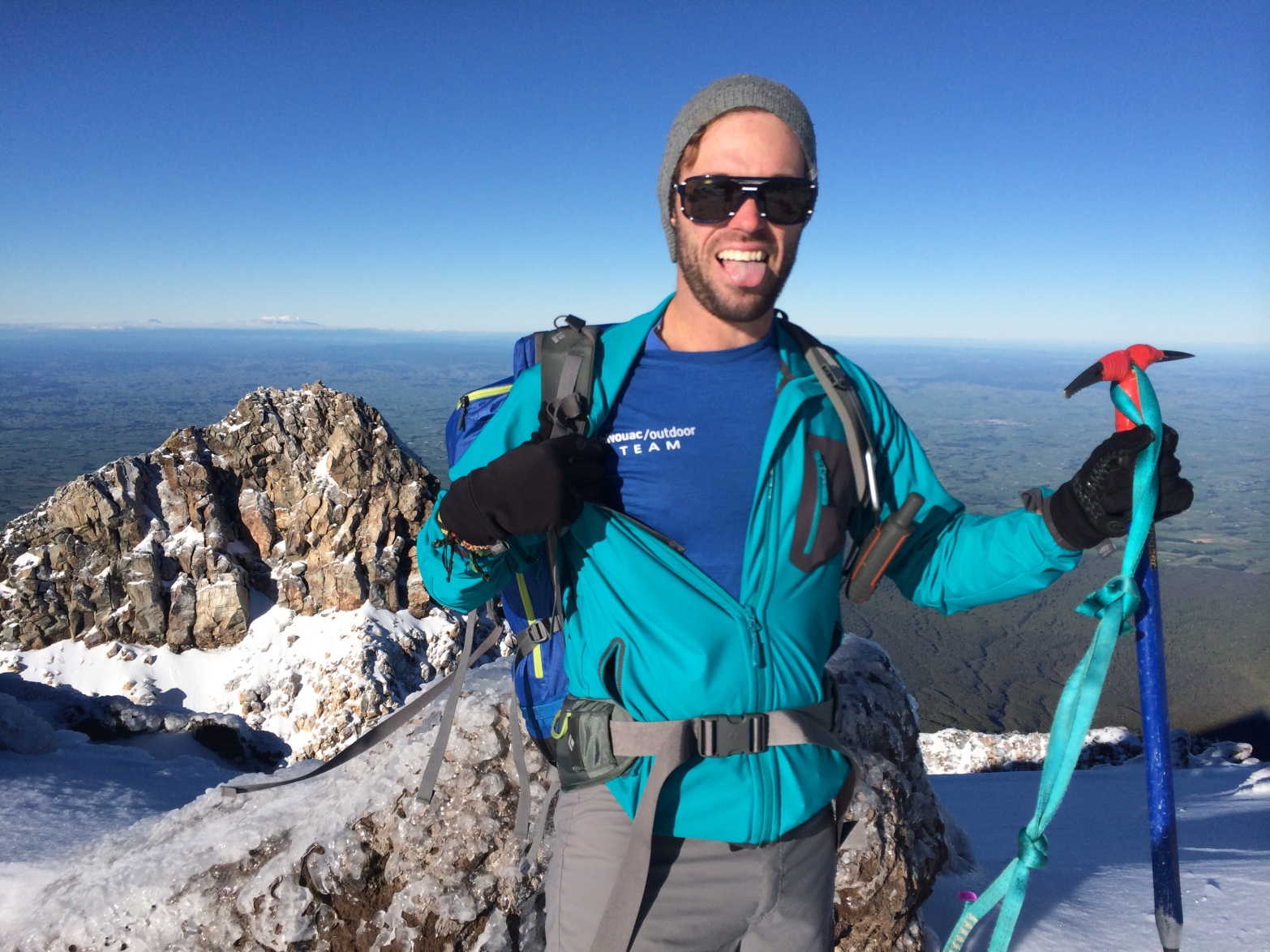 One thought on “Mt Taranaki winter sea to summit 2014”