Thought of the day: The adventure has really begun

Quote of the day: Success Will be The Compounding of Daily Attacks

Song of the day: Alice in Chains- Man in a box (first song played)

Have you ever built something up so much that you are worried the reality will not live up to your expectations? In my last month of training I ran over 600km, most of this in the dark wet embrace of Auckland’s winter. Running to and from work was the only way I could fit my training around my job. Due to the presence of the Tamaki Inlet there were only 2 main ways to get to work so the exercise became somewhat monotonous. The thirst for adventure kept me pounding the wet pavement day after day as I knew that shortly I would be running alone through the Caucasian mountain range and attempting to complete something no one has ever done before.

The time had finally come and I arrived in Georgia at 3:55pm, Monday 30th June 2014. I was excited yet apprehensive as for hours and kilometers I had dreamed of this day but this was my first time in Eastern Europe so I was not totally sure what to expect. No matter how long you have spent on Google earth, maps and images planning for an expedition it is not until you arrive at the start, breathe the air and absorb the surroundings that a true perspective is achieved.
Zarina and I walked out the arrival gates to thankfully be greeted by that winning grin of Rich Henry. After a three second manly embrace Rich begins to explain the adventures he has had in the past 20 hours starting with the fact that his bag has gone AWOL. Luckily it was only clothes and he still had the means to organise our sweet rental van we have affectionately named Boris. We stocked up on supplies, then met up with Zarina’s uncle Sergei and auntie Zalina for some fine dining and one last taste of luxury for the next couple of weeks. It was a beautiful dinner with amazing local food, dancing and music in one of Tibilisi’s hidden gems but unfortunately my starting point at the Black Sea was a 6 hour drive away, it was already 11:30pm and it was raining cats and dogs. We said our goodbyes and pushed on as I had to get to the coast and start running by 7am at the latest due to the forecasted 34 degrees so Rich and myself took shifts driving through the night with Zarina’s key role being entertainment. We finally arrive at the coast to be greeted with a most welcomed surprise best described by the photos below.

I only managed to get about an hour and a half sleep and my body was not sure if it was day or night but it was straight to work as the sun was already packing a punch so I dipped my hands in the water, gave a short korero and headed on my merry way. Running east in the morning is not ideal Neil but that was the direction to Mt Elbrus. After five k’s I was already feeling the effects of the climate as the temperature rapidly climbed towards 30 but strangely I feel my body still has an inbuilt memory of the Mt Kilimanjaro sea to summit so I was able to cruise at 5:40 min/km for the first 21km of the day. It became too hot to continue so I decided to split my run and take a break for a while. 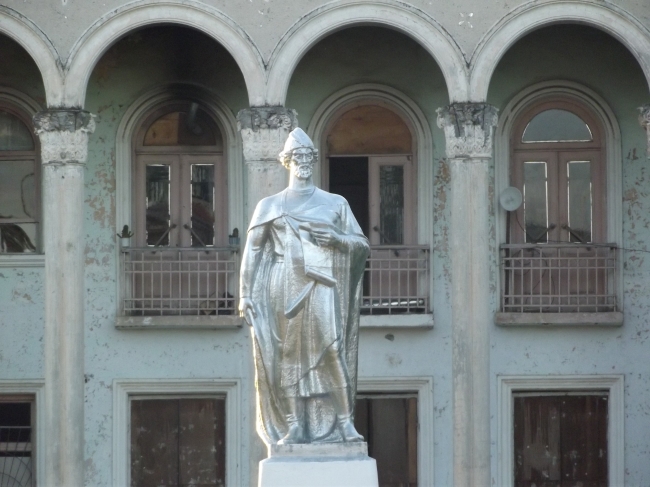 Later that day the sun cooled off so it was time for the next 21km, and the first nine went rather swimmingly as Z took over the support role as Rich caught up on some much needed sleep. We got some great footage of old buildings, ruins and livestock and then I had to navigate through a few back roads to get to the main route to Mestia. This is when things went a bit pear-shaped, as Zarina did not see me go past her on the road and thought I got lost. After about 7km I was wondering where she was as I needed some water and I clicked to what may have happened. I just put my head down and thought I will finish the 21km and eventually they will find me on this road. I finally finished my run and parked up on the road side and waited for my ride but it did not come. It was now 10:30 and I knew they would be getting worried so the thumb went out and after about 10 minutes I managed to find a ride. In hindsight getting into a car with three strange men and two of which were drinking heavily may not have been wise but I was desperate and they turned out to be really friendly.
I got dropped off on the outskirts of town and ran the 2km back to our hotel at 11pm to see Zarina and receive a welcome back from war hug. A few small hiccups to start the adventure but that is exactly what this is, an adventure and from tomorrow we will be a well-oiled machine. I could continue this story forever as this place is so interesting but we have plenty of time for stories.
To answer my question at the beginning my expectations have definitely been reached and it feels fantastic to be at it again.

5 thoughts on “Day #1- The adventure begins in spectacular fashion”