Location- Base camp to the saddle

Song of the morning- Monarch, Shapeshifter

Thought of the morning- These are the moments I live for. Not necessarily the summit, but special moments of harmony during he journey.

My alarm went off at 2:30am but I have been waking up every 30 minutes since 12 in anticipation. I apprehensively zipped open my tent to see what type of weather I would be contending with. To my delight I could see stars and a full moon was shinning a path up the mountain. Dehydrated fruit salad, wheat flakes and milk powder was on the breakfast menu along with an English breakfast tea. I finished packing everything and dilly dallied around until I realised it was now 3:30 and I had planned to walk at 3:00 So I set off at a quick pace to try and make up for lost time as the forecast was for high winds, rain, snow and thunder in the afternoon. I had already climbed this same path two days earlier on my acclimatisation day so it was head down, kiwi tunes cranking and watching one foot slowly overtake the next for four hours.

As I was walking two huge snow cats full of tourist climbers were escorted up the mountain to the start of the traverse at 5150m. I will talk about my feelings towards this in a whole separate post. As the sun came up I was rewarded with the most incredible sunrise of my life and there was no one else anywhere in my view. I could no longer look at my feet as it would have been a crime, even though my face was getting smashed by the piercing wind I could not take my eyes off the horizon. Excuse the cliché but it really is moments like this I live for. On a mountain, in Russia, by myself, 5am, on my way to the top and scenery to rival The Lord of The Rings. (ooh that’s right, I went there) 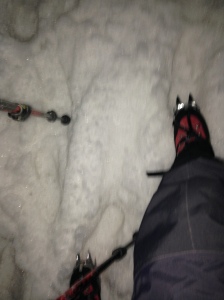 I reached the top of the traverse in under four hours which was far too quick for this altitude. I blame the track Monarch by Shapeshifter as that is impossible to walk slowly to but what a tune! I sat down to have a quick break and felt dizzy. I tried to eat a one square meal and drink some water but felt sick. I had a brief yarn to a couple of polish climbers who asked if I wanted to join them, as tempting as it was I said if the weather gets worse we can stay close as I really wanted to bash it out myself. Just after the Polish climbers continued my worst fear happened, I ended up spewing four times, which in this situation is really bad as you dehydrate yourself. I then lay on the snow alone and sweating from convulsions in the minus degree temperatures. Decision time #1- do I head back down and rest and wait for the better weather tomorrow at the risk of an incorrect forecast and all of the wasted energy today, or push on, take a concrete pill, rehydrate and continue. I chose the latter, skulled a litre of water and started the traverse. 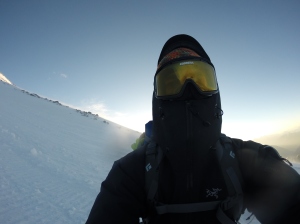 There had been 10cm of fresh snow overnight and the wind was blowing more fresh powder onto the route. I should have been snowboarding as this made it really hard to crampon. I kept trying to kick my spikes into some ice to get a stable grip but my ankle kept rolling over in the soft snow. It was 50/50 whether my ice axe would find some ice or sink to the pick and I would fall over. This was frustrating to say the least as now the visibility was next to nothing and I could hardly see the next marker pole. My dream for fresh tracks had come true as any tracks from previous climbers were automatically blown away from the 40km head wind. There is a popular saying about Mt Elbrus ‘it is two different mountains, one in good weather, and one in bad weather’. It was now clear that I would be attempting to summit the later. 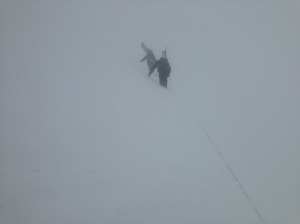 I was still a bit dizzy from vomiting and was falling over every five or six steps due to the conditions but this slowed me down as I re hydrated and my body started to adjust to the altitude. I even managed to catch up and over take the Polish climbers as they too were struggling to get to the saddle. When it is a white out it is really hard to gauge the distance and time you have traveled, but i knew that I had to gain another 60m of altitude before I reached the base of the saddle. This is when my Suunto Ambit 2 watch came into play as the altimeter allowed me to know exactly where I was, and if it got too gnarly and I needed to turn back then I could use the track back feature and follow the exact path I had just climbed. So if you have been thinking I was stupid for continuing I have both experience at altitude and technology on my side – so all is good and I love these types of situations where you are constantly making calls and decisions as opposed to mindlessly following a track and a group.

I finally reached the saddle where I thought the weather would be more sheltered. I was wrong. Stay tuned for part two of this epic battle and the climax of sea2summit7 Europe.